Gebze Technical University (GTU) was established upon the foundations and experience of Gebze Institute of Technology (GIT) with the decree dated 4 November 2014 of the Grand National Assembly of Turkey, interiting and embracing GIT's 22-year heritage. With its infrastructure, capacity, and academic staff, GTU is one of the young but experienced universities of Turkey, set to become the most prominent scientific hub of the country.

Gebze Technical University has always continued its efforts to offer education and teaching and conduct research in ever-increasing quality, and gained a new status being designated as one of the 10 research universities of Turkey, with the  announcement made by Dear Mr. President at the opening ceremony for the 2017-2018 Academic Year. 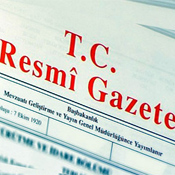 Establishment Announcements of GIT and GTU in the Official Gazette of the Republic of Turkey: